NOTABLE QUOTE FROM THIS TALK:

“It’s remarkable that all the diversity of life is the result of four genetic letters.”

All life, every living thing ever, has been built according to the information in DNA.

What does that mean? Well, it means that just as the English language is made up of alphabetic letters that, when combined into words, allow me to tell you the story I’m going to tell you today, DNA is made up of genetic letters that, when combined into genes, allow cells to produce proteins, strings of amino acids that fold up into complex structures that perform the functions that allow a cell to do what it does, to tell its stories.

The English alphabet has 26 letters, and the genetic alphabet has four. They’re pretty famous. Maybe you’ve heard of them. They are often just referred to as G, C, A and T. 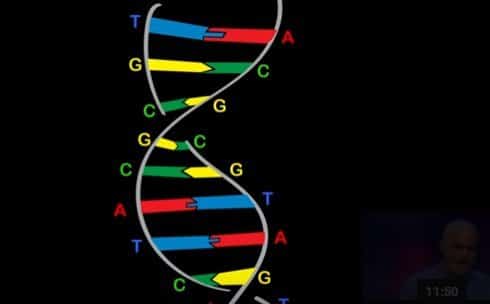 But it’s remarkable that all the diversity of life is the result of four genetic letters.

Imagine what it would be like if the English alphabet had four letters. What sort of stories would you be able to tell?

What if the genetic alphabet had more letters? Would life with more letters be able to tell different stories, maybe even more interesting ones?

In 1999, my lab at the Scripps Research Institute in La Jolla, California started working on this question with the goal of creating living organisms with DNA made up of a six-letter genetic alphabet, the four natural letters plus two additional new man-made letters.

Such an organism would be the first radically altered form of life ever created. It would be a semisynthetic form of life that stores more information than life ever has before. It would be able to make new proteins, proteins built from more than the 20 normal amino acids that are usually used to build proteins.

ALSO READ:   Why is Hollywood so White? by Colin Stokes at TEDxBeaconStreet (Transcript)

WHAT SORT OF STORIES COULD THAT LIFE TELL?

With the power of synthetic chemistry and molecular biology and just under 20 years of work, we created bacteria with six-letter DNA. Let me tell you how we did it.

All you have to remember from your high school biology is that the four natural letters pair together to form two base pairs. G pairs with C and A pairs with T, so to create our new letters, we synthesized hundreds of new candidates, new candidate letters, and examined their abilities to selectively pair with each other.

And after about 15 years of work, we found two that paired together really well, at least in a test tube. They have complicated names, but let’s just call them X and Y.

The next thing we needed to do was find a way to get X and Y into cells, and eventually we found that a protein that does something similar in algae worked in our bacteria.

So the final thing that we needed to do was to show that with X and Y provided, cells could grow and divide and hold on to X and Y in their DNA.

Everything that we had done up to then took longer than I had hoped — I am actually a really impatient person — but this, the most important step, worked faster than I dreamed, basically immediately.

On a weekend in 2014, a graduate student in my lab grew bacteria with six-letter DNA. Let me take the opportunity to introduce you to them right now. This is an actual picture of them. These are the first semisynthetic organisms.

Well, maybe some of you are still wondering why. So let me tell you a little bit more about some of our motivations, both conceptual and practical.

Conceptually, people have thought about life, what it is, what makes it different from things that are not alive, since people have had thoughts.

ALSO READ:   Is Fire a Solid, a Liquid, or a Gas? - Elizabeth Cox (Transcript)

Many have interpreted life as being perfect, and this was taken as evidence of a creator. Living things are different because a god breathed life into them.

Others have sought a more scientific explanation, but I think it’s fair to say that they still consider the molecules of life to be special. I mean, evolution has been optimizing them for billions of years, right?

Whatever perspective you take, it would seem pretty impossible for chemists to come in and build new parts that function within and alongside the natural molecules of life without somehow really screwing everything up.