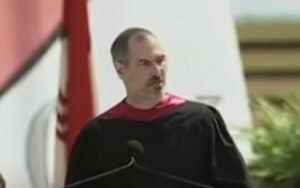 Sharing is Kindness in Action!

This is the full transcript of the Commencement address: ‘Stay Hungry. Stay Foolish’ delivered by Steve Jobs, CEO of Apple Computer and of Pixar Animation Studios, on June 12, 2005 with intro by Stanford President John Hennessy.

It now gives me great pleasure to introduce this year’s commencement speaker, Steve Jobs – the Chief Executive Officer and Co-founder of Apple and Pixar Animation Studios. Stanford University has been characterized since its founding by willingness to be bold and to strike out new directions, and this is a characteristic very much shared by today’s speaker. A pioneer and visionary for almost three decades, his name and the companies he has founded have been synonymous with innovation and creativity.

As a young boy, growing up in Los Altos, Steve Jobs came of age at the same time as Silicon Valley. While still in school, he attended lectures informally at Stanford as well as at Hewlett Packard, where he spent his summer working.

After graduating from high school, he left California to attend Reed College. A trek through India, and a short stint as video game designer for Atari followed.

Soon after his return to the Valley in 1974 he became a regular, along with Steve Wozniak, at meetings of the Homebrew Computer Club, held at the Stanford Linear Accelerator Center. It was not long before the two of them had built the prototype for the Apple I.

The Apple I was very fast at the time, reading and writing four kilobytes in about twenty seconds. About 20,000 times slower than we do so today.

Pangambam S
How Stress is Killing Us & How You Can Stop It: Thijs Launspach (Transcript)

Full text of psychologist Thijs Launspach’s talk: How stress is killing us (and how you can stop it) at TEDxUniversiteitVanAmsterdam conference. In th...

Pangambam S
What if Everything You Know is Wrong: Bob McDonald (Transcript)

Full text of science journalist Bob McDonald’s talk: What if Everything You Know is Wrong at TEDxVictoria conference.Listen to the MP3 Audio here: TRA...

The Apple II was faster still, but more importantly introduced color monitors into the home market. In the mid-1980’s the Macintosh became the first truly user friendly personal computer. You didn’t have to be an expert to set it up, or to load software or to transfer information between applications. And the mouse offered point-and-click convenience, and opened the door to computer literacy for everyone.

I still remember the amazed faces of onlookers, as they saw a computer that was completely different from the personal computers of that day.

Steve also co-founded Pixar Animation Studios, which has revolutionized the film industry, in its short history, with a brilliant use of technology, and produced two Academy Award winning films: Toy Story and Finding Nemo.

Since his return to Apple 8 years ago, Steve has reinvented the company once again, extending its vision to music and new digital media. iPod and iTunes have changed the way we listen to, organize, store and purchase our music. And in my case, the way I often read books.

Now songs we love are just $0.99, and a completely legal click away. iPhoto and iMovie revolutionized the ability of consumers to organize, edit and display digital photography and video, putting capabilities that once cost thousands of dollars, into the hands of every Mac user.

Steve is also widely recognized for his ability to create an innovative environment inside Apple, as well as an external company image that is equally innovative.

Just think about Apple’s marketing campaigns over the past three decades — a promotional flyer in 1976 showed Isaac Newton sitting under a tree just as an apple was falling by, with the catchy exhortation to byte (B-Y-T-E) into an Apple.

ALSO READ:   Why Are These 32 Symbols Found in Caves All Over Europe by Genevieve von Petzinger (Transcript)

Oops, this content can't be loadedbecause you're having connectivity problems