Skip to content
Home » How to Motivate Yourself to Change Your Behavior: Tali Sharot (Transcript)
3shares

Full transcript of Cognitive neuroscientist Tali Sharot’s TEDx Talk: How to Motivate Yourself to Change Your Behavior @ TEDxCambridge conference. She is the author of the book The Influential Mind: What the Brain Reveals About Our Power to Change Others.

Listen to the MP3 Audio: How to motivate yourself to change your behavior by Tali Sharot @ TEDxCambridge

So, we all have some behavior that we would like to change about ourselves. And we certainly all want to help someone else change their behavior in a positive way. So, maybe it’s your kid, your spouse, your colleague.

So I want to share some new research with you that I think reveals something really important about what gets people to change their behavior.

But before I do that, let’s zoom in on one strategy that I think you probably use a lot. So, let’s say you’re trying to stop yourself from snacking. What do you tell yourself? Well, most people, in a monologue, will say, “Beware. You’ll be fat.”

And if this was your kid, you would probably tell him that smoking kills and, by the way, he’s in big, big trouble.

So, what we’re trying to do here is we’re trying to scare ourselves and others into changing their behavior. And it’s not just us. Warnings and threats are really common in health campaigns, in policy.

It’s because we all share this deep-rooted belief that if you threaten people, if fear is induced, it will get them to act. And it seems like a really reasonable assumption, except for the fact that the science shows that warnings have very limited impact on behavior.

So, graphic images on cigarette packets, for example, do not deter smokers from smoking, and one study found that, after looking at those images, quitting actually became a lower priority for smokers.

So, I’m not saying that warnings and threats never work, but what I’m saying is, on average, they seem to have a very limited impact.

And so, the question is: why? Why are we resistant to warnings?

Well, if you think about animals, when you induce fear in an animal, the most common response you will see is freezing or fleeing; fighting, not as much.

And so, humans are the same. So if something scares us, we tend to shut down and we try to eliminate the negative feelings. So, we might use rationalizations.

For example, you might tell yourself: “My grandpa smoked. He lived to be 90. So, I have really good genes and absolutely nothing to worry about.”

And this process can actually make you feel more resilient than you did before, which is why warnings sometimes have this boomerang effect.

In other times, we simply put our head in the ground. Take the stock market for example. Do you know when people pull their head out of the ground to look at their accounts — not to make a transaction, just to log in to check their account? 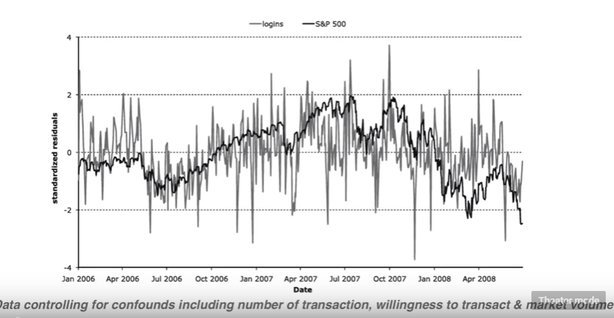 So, what you’re seeing here, in black, is the S&P 500 over two years, and in gray, is the number of times that people logged in to their account just to check. And this is data from Karlsson, Loewenstein & Seppi, it’s control data for all the obvious confounds.

And all this is true as long as bad information can reasonably be avoided. So, what you don’t see here is what happened a few months later, in the financial collapse of 2008, when the market went drastically down and that was when people started logging in frantically, but it was a bit too late.

ALSO READ:   I Grew up in the Westboro Baptist Church. Here's Why I Left by Megan Phelps-Roper (Transcript)

So, you can think about it like this — it’s not just finance: In many different parts of our life, we have warning signs and bad behaviors now. And they could potentially lead to all these bad outcomes later, but not necessarily so, because there are different routs from your present to your future, right?